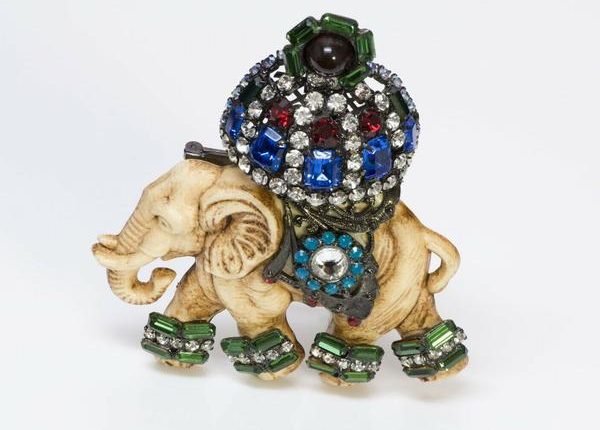 Lawrence, (Larry) Vrba has been creating jewelry for over 50 years and is “responsible” for some of Miriam Haskell’s most successful jewelry collections in the 1970s. Vrba’s pieces are usually notable in size, four inches or more, and if you are a frequent visitor to Broadway and the Metropolitan Opera, you are likely very familiar with his jewelry designs.

Vrba is known for his huge collection of vintage pearls and rhinestones, which he combines with cast glass petals, elaborate ethnic enamel patterns and antique metal wire work. His creations are often referred to as jewel sculptures. Every Vrba piece is still made by hand. Lawrence Vrba jewelry is also quite rare as it was never mass produced or manufactured outside of the United States.

Vrba moved from his home in Lincoln, Nebraska, to New York City in mid-1969. Looking for work, and in his opinion a huge fan of Miriam Haskell jewelry, the future jewelry maker went to the Haskell offices several times asking for a job. In one of those tenacious attempts, Vrba encountered then-owner of Haskell Jewelry, Sandy Moss, who decided to hire Vrba as a switch.

Within two months, Vrba was a designer making jewelry every Friday, a position he held for about 18 months. It was around this time that Bob Clark, the brand’s chief designer, decided to go his own way and work with William De Lillo (worked for Tiffany, Harry Winston before working with Clark. He later moved to Paris to work for Ricci and Elsa Schiaparelli work). Young Larry Vrba left Miriam Haskell Jewelry and went with Clark.

The partnership did not last long and Vrba switched to Castlecliff Jewelry, where he worked until 1972. During his time at Castlecliff Jewelry, Lawrence designed a very successful jewelry collection with a pre-Columbian-inspired look. Pearls were melted to form the signature centers of this line. Made of glass in the first season, some more expensive natural stones were also used in the second season. Castlecliff created her jewelry on 17th Street in Manhattan and her showroom was on 5th Avenue across from B. Altman.

At about the same time in Haskell, another chief designer left the company and Vrba returned to channel his talent and creativity as chief designer at the Haskell, a position he held until 1981.

In one of the later interviews, Vrba admitted that in the nine years he designed jewelry for Haskell, his favorite collection was by far the Egyptian line. Vrba was traveling in Europe and came across Egyptian stamps that immediately piqued the jewelry maker’s curiosity and became an inspiration for one of the most popular collections in Miriam Haskell jewelry history.

Egyptian scarab motif brooches, which Vrba designed in his first two years as the Haskell’s chief designer, became an instant hit and were very well received. Thousands of these brooches were made and stayed in line for two years. Two years was considered a very long time back then, as most custom jewelry from that time was only sold for one season.

In 1983, Vrba launched its own line of jewelry that created three-dimensional, colorful and mini-sculpture-like statement pieces. He used traditional techniques and applied them to unusual materials to take costume jewelry to a whole new level of casual chic. For example, he would use a real seashell (which has been polished to mother-of-pearl) and then artificially graduate its hue, add glass beads and rhinestones to make brooches with floral motifs. Instantly upgrade the look of a costume jewelry to something you might want to pass on to your daughter. Since the start of Lawrence Vrba Jewelry, Broadway producers have come to him to design jewelry for their hit shows such as Hairspray, Wicked, Exit the King, “Blythe Spirit” with Angela Lansbury and the revival of “Lend Me a Tenor” .

Vrba now works in his own studio in Brooklyn, creating unique jewelry almost every day. Working alongside Vrba are two dedicated artisans, including Chris March, who is known in New York jewelry making for his superb soldering and wire manipulation skills.

As one of the most famous contemporary jewelry manufacturers, its jewelry designs are still in great demand 50 years later. Perhaps that is because Vrba never really stopped mastering his craft, looking for new textures and materials, and because he still enjoys what he’s doing.

What are Recycled Gem stones and Diamonds for Finish Customers? Discover out extra with the professional Jared Holstein