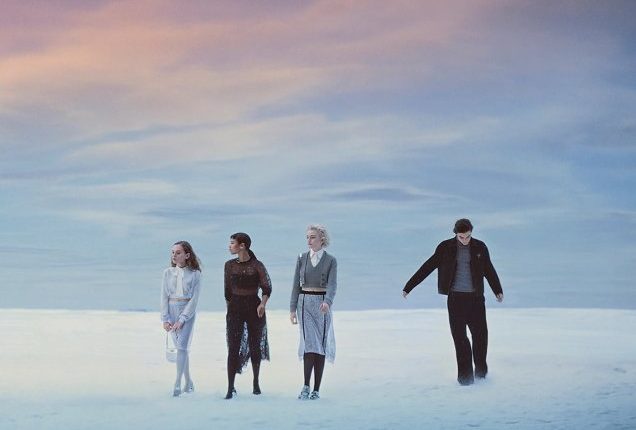 Since Miuccia Prada welcomed Raf Simons as Co-Creative Director of Prada in 2020, creatives have been experimenting with photographers when it comes to the fashion house’s advertising campaigns. The duo’s debut outing in spring 2021 went to Ferdinando Verderi, Xavier Dolan came on board for his Galleria handbag installment and David Sims tried his hand at filming the fall 2021 commercial. Now Glen Luchford is back and taking the Christmas campaign 2021 with Julia Garner, Shira Haas, Taylor Russell and Louis Partridge. The cast roams a digitally created winter wonderland of Los Angeles for the series aptly titled A Midwinter’s Night Dream.

The result immediately sparked a debate on our forums. “I don’t want to sound retrograde, but Prada from Luchford 1997-1998 with Amber Valletta and that nonsense, feel the difference,” disapproved Alien Sex Friend.

“Zoomed out too much and the vague post-apocalyptic context doesn’t really make me want to spend my money on luxury items … maybe hoarding bottled water,” YohjiAddict admitted.

“Total disappointment of a creative reunion. It could have been so much better, ”announced Zoom.

“Admittedly, the post-production is solid – although for my taste it is a bit (a lot) to The Day After Tomorrow. It’s a shame about the cast, the styling and this stupid bucket hat, ”said Phuel.

“To be completely honest, I haven’t admired a Prada campaign since pre-fall 2020 … and while that doesn’t do anything for me right now, the color scheme here is pretty great and the sense of minimalism works wonders at Prada,” admitted vogue28.

“Stunning campaign, better than the previous ones,” said VogueGirl8910.

See more of the campaign and join the discussion here.