Life is Too Brief To not Sparkle: Gorgeous and Distinct Schreiner Jewellery 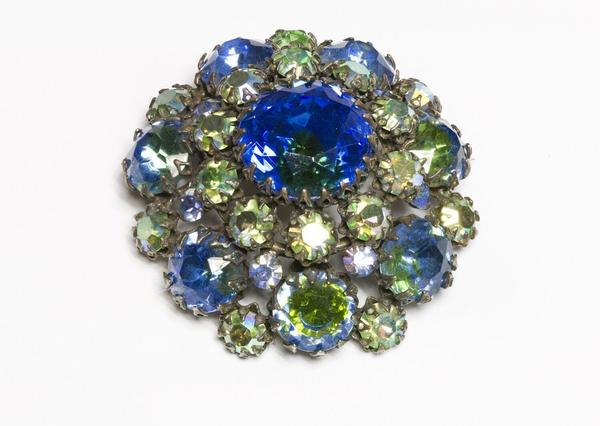 Schreiner jewelry pieces embody luxurious vintage workmanship offered by one of America’s foremost designers of high-end costume jewelry. German-born jewelry designer Henry Schreiner started his jewelry business in 1939, though until 1951 his creations had no markings, making them very difficult to identify. His designs were never mass produced, and were always meticulously crafted by hand in New York.

The Schreiner Company was known for its unusual and imaginative use of color, which Terry Schreiner, Henry’s daughter attributed to working for ‘the couturiers’ and having the color swatches before anyone else. Today, Schreiner jewelry pieces, alongside Chanel, are highly sought after in the world of vintage costume jewelry.

As a blacksmith from Bavaria, Germany, Henry Schreiner emigrated to the United States in 1923, five years after World War I ended. His blacksmith skills landed him a job at Better Buckle Company, which produced metal buckles, buttons and fasteners, from which Henry gradually transitioned to creating items of jewelry by his own designs.

The early jewelry pieces made by Henry Schreiner’s company in the early 1930s are almost unrecognisable when compared to the Schreiner pieces made in the early 1950s by Henry himself, and the pieces made after his death, through 1973, by his son-in-law Ambros Albert. The early 30s pieces were largely Art Deco designs and monogram pins made of sterling silver decorated with marcasites – sometimes called “white iron pyrite”, iron sulfide with orthorhombic crystal structures. Marcasites were extremely popular back then.

The stones were exclusive to Schreiner and, unfortunately, are no longer being manufactured. This is why it’s best to buy your Schreiner jewelry pieces from a reputable vintage and antique jewelry dealer to insure your piece is of well-cared-for condition. Cathy G., a vintage jewelry collector and a lucky owner of Shreiner’s rose colored and pearl ruffle pin, which is unfortunately missing two of its keystones, said “I have been looking for replacement stones forever.”

Schreiner designs are truly exceptional, as his choice of materials was unusual for America’s market at the time making the interest towards his creations only grow. This is also due to the outstanding quality of his pieces, something not all costume jewelry have in common.

Arguably, Schreiner’s most well-known design hallmark is inverted stones. The stones are placed in the setting with the pointy side up instead of down – the facets of crystals are shown rather than the flat surface, thus enabling light to catch the beautifully crafted stones, giving the whole design a more elevated, made-of-precious-stone look. The stones were both foiled and unfoiled. Inserting unfoiled rhinestones upside down meant that the stone underneath was able to pick up the color of the garment that the person was wearing. This gave the Schreiner jewelry wearer a unique advantage of having costume made jewelry for each garment – if one put, say a brooch with such stones over a burgundy color garment, the brooch’s stones would pick up the burgundy tone and looked like the brooch was custom made for that particular garment.

Schreiner also famously used the prong settings as a part of the overall design, creating elegant “fleur-de-lis”, a stylized lily that was used in the heraldry for European monarchy and nobility.